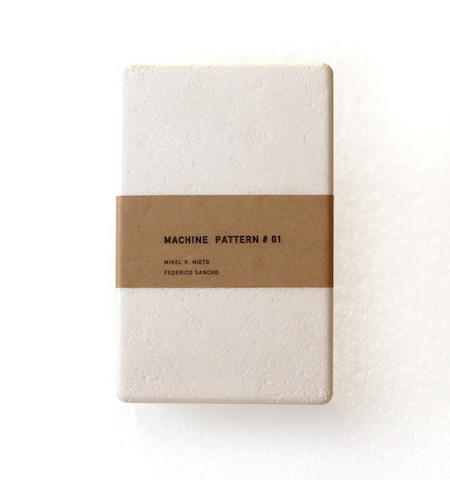 Published in a yellow cassette by Security Device (2012) in collaboration with BeFestival.
Sold out!


Update Required
To play the media you will need to either update your browser to a recent version or update your Flash plugin.

Machine Patterns # 01 is the result of a work of more than one year which wants to re-create the mechanical manufacturing processes that are experienced specifically in AE Harris & Co. The edition consists of a graphical part, by Federico Sancho, and the sound part with two musical compositions in the release of a yellow cassette, by Mikel R. Nieto. The sound work is made with field recordings of the AE Harris & Co. installations in 2011. The field recordings collected the sound material given off by the machines and the mechanical manufacturing processes.

The result is two ironic compositions that recreate the sound situation daily living by workers in order to preserve the memory space and people who works there, in some ways is a tribute to the hard work done by workers daily at AE Harris & Co. The edition in cassette responding to the need to recover a format that contains in itself characteristics that are related to the mechanical and physical aspects present in the factory. The color of the cassette, yellow, is also a reference to the commonly used colors in security systems, arousing the attention and sense of alarm before listening to the cassette. The graphic part is closely related to sound compositions. Federico Sancho has transcribed the sound in pictures through the use of typography as musical notation, giving the graphics an ironic play between the real and fictional representation. The release is the result of a long work which recognizes the reality of the factory workers at AE Harris & Co.

Many thanks to Federico Sancho, Maria Bobes, Isla Aguilar, Miguel Oyarzun, Mike Tweddle, Be Festival and all the workers.

One of the big differences between the 80s cassette movement and the current revivalists, is that these days there is hardly a weird package around, unlike the 80s with its pyramids, cans, pill boxes and bathing sponges. So in that respect this nice oversized styrofoam box needs a big applause – sufficiently different from the majority of tapes reviewed here. Inside the box we find a yellow tape with no print and a piece of paper with some sort of coded message, but puzzling is not my middle name, so I didn’t bother. I tried the website for more clues, and having films and pictures in stead of words is a nice idea, but they aren’t hardly informative. So, the nice graphic by one Federico Sancho and the sound by one Mikel R. Nieto, whose website is equally uninformative. Which is a pity since the music is actually quite nice. Here too I am reminded of the 80s with its drone like sounds, humming like a machine, and perhaps taking its source from a machine. When the drones end, there is, lo and behold, even a machine like sound, one of a primitive kind. Maybe a print place of some kind? With some letter press, hand operated device? I am not sure, but it adds to the conceptual nature of the whole package. What it is all about is a mystery, but it looks and sounds great. And that’s perhaps also a nice 80s touch, where you had zero information most of the times. (FdW) –

In a Styrofoam box with a beautifull presentation comes sealed in recycled paper and highlight the title ‘Machine Patterns # 01′ and the names of Mikel Nieto (music) and Federico Sancho (graphic). Inside this box there is a yellow cassette accompanied by notes that seemed to be coded messages. This cassette was released on Security Device, a group of (apparently) Spanish artists. ’Machine Patterns # 01′ are field recordings made in the manufacture factory AE Harris & Co. in Birmingham, with mechanical processes that are tapped in some cases and not in others. You hear a lot of noise that could be inserted into the post-industrial line. Intense buzzing arise that become drones and a sultry wall of sound that reveal a certain melodic line. In addition, mechanical and repetitive movements come out. These are sounds that are the rhythm base of a track, to which are added various sound objects. It is possible that not all the sounds you hear are occurring at the same time, in any case, are carefully assembled. Interesting proposal showing how everyday noises that take place in a factory can deploy new sounds that conjure up images, colors and stories. –